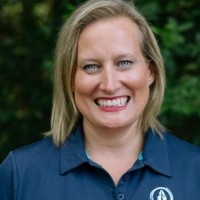 Elementary-age campers had a jolly good time at our annual winter weekend program. Nearly 300 Kindergarten – 6th graders experienced the faith, fun, and friendship of Cho-Yeh summer camp – except with a Christmas twist!

Opening Cho-gram on Friday night featured the first act of Emoji Christmas, a skit emphasizing the birth of Jesus as the true meaning of Christmas.  Campers were treated to a pizza party to end the night!

Saturday began with worship and Bible study, before the traditional Cho-Yeh messy game of Christmas Cookie Crumble.  Campers built “gingerbread houses” out of cardboard to protect from an onslaught of paint, fake snow, and cold cooked spaghetti covered in “syrup” (brown paint). In a matter of minutes, campers and counselors were covered from head to toe in a mixture so unpleasant, it would make The Grinch feel nauseous. After cleaning up and lunch, it was time to begin the afternoon festivities!

Campers got the opportunity to try out favorite outdoor activities such as our high ropes adventure park, climbing tower, zipline, giant swing, archery tag, and crate stacking.  For extra fun, a Christmas twist was added to pirate raids, as campers were given sprinkles (instead of water) to throw at unsuspecting friends and counselors.

After a quick dinner, the fun shifted to the Cho-dome for a camp-wide night game: Elf Attack! Cabin groups competed to collect candy canes from elves hidden all across camp.

Sunday wrapped up with another time of worship, the final act of the Emoji Christmas skit, and one last interactive bible study activity. Many campers headed home to nap after a full weekend of outdoor fun!  Sad to leave, many are already counting down the days until they return this summer!

One and two-week options are still available for Summer 2018.  Reserve your spot before waitlists form.

Previous Raising Up Leaders: Leslie Casiday’s Story Next up Madison Van Antwerp: Cultivating Faith in the Next Generation